Information about Bangkok often dubbed The City of Angels

Bangkok is dense and hectic, the city has a staggering 1,000 skyscrapers and ranks as the worlds 17th tallest city. In amongst the endless sprawl of apartments, office blocks and highway networks, shacks and buildings reminiscent of a time long passed hopelessly try to keep a foothold in this rapidly developing city.

It’s no secret there is a lot of poverty in Bangkok, but there is also an untold amount of wealth, and the diversity between the two is somewhat captivating. That’s just the way things are in Thailand, most people accept their social status with grace, and that’s what makes it ‘the Land of the Smiles.’

Bangkok is Thailand’s capital city and countries largest urban area. Known in Thai as ‘Krung Thep’, the city has a population of approx 8 million registered citizens, but due to the influx of immigrant workers and unregistered residents, the total is estimated at 15 million.

Bangkok covers an area of 1,568.7 km2 (606 square miles), making it the 21st biggest city in the world. The city is made up of 50 districts, which are known in Thai as Khet’s. These districts often cover larger areas, and may not offer much navigational help when getting round Bangkok – Thais will refer to an area by the name and number of the road, or points of interest such as temples, markets, shopping malls, major junctions, etc. 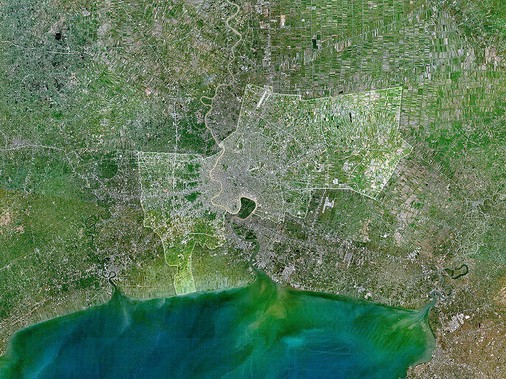 Residential areas are either crammed in what little space is left of the greater Bangkok area, or spread out through slightly less dense urban suburbs.

Tourist areas are also spread across the city, backpackers tend to head for the cheap guest houses of Khao San Road and the surround Banglumpoo area. Others may choose to stay in the hustle and bustle of China Town, or in the luxury of the central shopping areas like Siam, Silom and the numerous areas of Sukhumvit.

The full ceremonial name of Bangkok enters Thailand in the Guinness Book of World Records as the place with longest name in the world:

The original name was given by King Buddha Yodfa Chulaloke, but was later edited by Rama 4, King Mongkut, Thailand’s 4th king and inspiration for ‘Anna and the King of Siam’ and ‘The King and I’.

What is now known as Bangkok was established in 1782 after King Taksin’s reign, during which time the capital, Thonburi, lay on the west bank of the river.King Buddha Yodfa Chululoke relocated the city on the eastern side of the river and gave the city its ceremonial name.

Luckily for the Thais, their language allows many words to be drastically shortened and the city picked up the official name of Krung Thep Maha Nakorn – meaning ‘the city of angles.’ 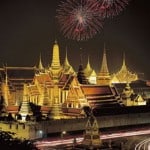 The origins of the official English name are somewhat debatable. ‘Bang’ is the literal Thai translation for ‘town situated on the bank of a river,’ but it is still unclear as to where the second syllable comes from.

Some believe that the term is derived from ‘Koh’ – meaning island – in reference to areas landscape which was then covered with canals.

Others believe ‘kok’ is derived from the Thai word for ‘one or more olive-bearing fruits’. In Thai, olives are known as ‘mahkok.’